Bookshelf, page 8     This is my newest books page, so putting it first, even though it is reallly apge 8.

Positive Psychology in SLA  edited by Peter MacIntyre, Tammy Gregerssn and Sarah Mercer.  OK, I've got a chapter in the book so can't be unbiased.  In addition to the editors, all well know in PosPsych circles, there are heavy hitters like Rebecca Oxford and Jean Marc Dewale.  I live in Japan so delighted to see Japan colleagues Tim Murphey, Joseph Falout and J. Lake here.  I think the book is important for two reasons.  It is one of the first academic books to directly connect  positive psychology and language teaching.  Also, it is published by Multilingual matters, a highly respected academic press.  So it makes it clear that this is real science.  Divided in to three parts, theoretical, empirical and applied, it has something for everyone. For some of use who have been sort of like voices in the wilderness, this is an important step.

Broadcasting Happiness by Michelle Gielan. Geilan is a former anchor of teh CBS morning news.  During the great recession, she hosted a series on that show about how positive psychology could help people during that troubled time. She got interested, went back to school (Martin Seligman's program in Penn) and became a positive psychologist. Largely, this deals with positive psychology in the workplace.  Well researched and well written.

My own university just opened a business department.  I'm teaching in it so am eager to learn more.
. 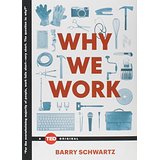 Why we work  by Barry Schwartz.  Not directly about positive psychology but very much influenced by the work of Amy Wrzeniewski (Yale) who is one of the foremost labor psychologists.  She came up with the idea of work as "job / career / calling" and the idea of "job crafting" -- modifying one's own job to make it more satisfying.   Schwartz contends that Adam Smith got it wrong.  Work should not just be about money.  It should be about meeting deeper needs.  And this can be done in all jobs, not just the "helping professions" where it is obvious.  This is a short book (112 pp) and parallels Schwartz's TED talk on the same topic.